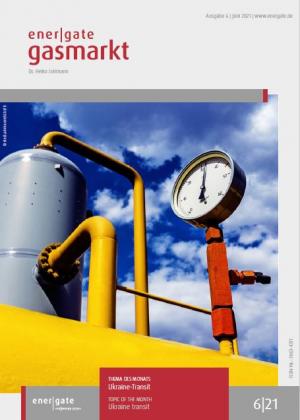 On April 27, a news item puzzled me greatly: "Trading prices for gas rise because Gazprom Export has not booked interruptible transit capacity in Ukraine for May," is roughly what analysts wrote. I didn’t get it. Why was it so relevant to the market that Gazprom did not book interruptible capacity? I then spoke to a few people who explained the background. You can find the details in the topic of the month. What became clear to me was that Gazprom Export could export more volumes to Europe. In the light of rather tight supplies and high prices, this should be profitable for the Russian gas major. But Gazprom Export is not increasing volumes. Instead, it is further emptying its storage facilities. Political reasons (Nord Stream 2) can’t be ruled out. And it doesn't look like a relaxed comfortable winter is coming up.

Alongside the confusion about the non-booking of interruptible capacity, the Ukrainian state replaced the Naftogaz CEO in a hasty procedure. What happened is described in more detail in the topic of the month. I have been fascinated by the development of the state-owned Ukrainian gas major over the last few years. From an inefficient and most likely corrupt company that fulfilled all my prejudices about state-owned companies in Ukraine, Naftogaz has developed into an accepted player in the European gas market. The company trades gas, offers the use of its storage facilities on attractive terms, and the group's TSO has also been certified under the EU Gas Directive since 2019. According to traders, the operational procedures are not working smoothly, and there is still room for improvement. The consequences of the appointment of Yuri Vitrenko as the new CEO remain to be seen. But many observers have concerns, pointing to the questionable procedure of the new appointment.

TOPIC OF THE MONTH Ukraine transit

Since the beginning of January, gas traders and analysts have been watching Ukraine gas transit closely (ener|gate Gasmarkt 03/21). In some days in February, the flows through the Ukrainian- Slovakian border point Velke Kapuzany were extremely low. In March, volumes recovered. Since then, they have increased slightly month by month, and have usually been very stable over the course of each month. Nevertheless, they are still well below the 2020 level.

Not only Russian flows are low, supply is tight in general. On the other hand, temperature-related demand and potential demand for the refilling of storage facilities is high. As a consequence, Ukraine transit flows as well as the booking and non-booking of transit capacity repeatedly trigger nervousness among traders and analysts, resulting in roller-coaster prices. The situation between April 23 and 27 was almost absurd.

ener|gate Gasmarkt repeatedly reported about the improving market position for biogas and biomethane. The legal framework improved slightly after amendments of the Renewable Energy Act (EEG) and the energy in buildings Act (EEG). The twists and turns the law-making process took were reported more than once in this publication. Furthermore, the transposition of the European Renewable Energy Directive II (RED II) into German law by the German Act on the Further Development of the Greenhouse Gas Reduction Quota will further improve the framework conditions for biogas and biomethane. This, too, was not clear after the first draft was circulating.

bmp greengas is one of the market leaders in German biomethane trading. Matthias Kerner, the managing director, already shared his optimistic outlook in an ener|gate Gasmarkt interview in February 2020 (ener|gate Gasmarkt 03/20). The development since last year was in line with his expectations, as he reports in the interview in this edition. bmp greengas sees a new dynamic especially in the heavy-duty transportation segment. In the meantime, bmp greengas sees such good potential in heavy-duty transport that it will build a plant for the liquefaction of biomethane together with the parent company Erdgas Südwest and the filling station operator for alternative fuels Alternoil. The new plant will have a capacity of 35,000 tons of LNG (around 48 million m3). The start of operation is scheduled for the end of 2022. The EnBW subsidiary Erdgas Südwest already worked in 2018 and 2019 on a similar project that was postponed mid-2019. Mr Kerner explains in the interview why the partners are now convinced that such a project is economically viable.