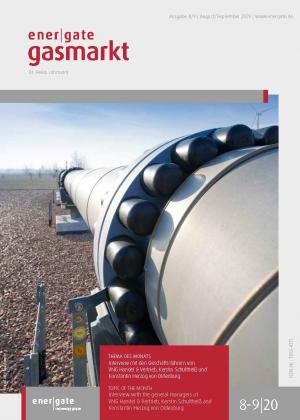 I can’t remember the last true 'silly season'. In the previous two months, more than enough happened in the gas sector and regarding hydrogen (which is almost part of the gas sector today) that is worth reporting. But I also used the time to read and present several quite interesting studies. Some of them were already published in May or June. I found a study conducted by the consultancy (perhaps more a commercial think-tank) Frontier Economics for the Ministry of Economics and Energy particularly fascinating.

The main idea: Car manufacturers are to have the option to meet their obligations for maximum carbon emissions for their fleets with credits for synthetic and advanced alternative fuels (SAAF). This will open up new opportunities for natural gas/biomethane and hydrogen in the fuel market. But that is only one aspect. For me, it is more important that the study shows nicely in detail how certificates (dubbed “credits” in the study for certain reasons) might be designed to allow trading, and how they may interlink different approaches to reduce carbon emissions. Such trading with certificates or guarantees of origin will be one requirement to develop a market for carbon-free/neutral hydrogen.

BDEW presented an interesting proposal on how the main elements for such a system could be designed. It is worth reading the two papers in parallel. There is one comment on the "hyped" topic of hydrogen that I found remarkable. It was made during a workshop of Stiftung Wissenschaft und Politik, a German think-tank, under Chatham House rules. “We do not need hydrogen, but energy solutions,” said a participant who I believe to be one of the most profound analysts in Europe.

Topic of the month: Interview with the general managers of VNG Handel & Vertrieb, Kerstin Schultheiß and Konstantin Herzog von Oldenburg

In 2018, VNG AG spun off its sales and trading business into a separate legal entity, VNG Handel & Vertrieb GmbH. This step was necessary for regulatory reasons, but it also adds transparency to the business performance of the VNG Group for outsiders, because VNG Handel & Vertrieb publishes its own annual report.

The VNG Group is currently performing very well, the earnings for 2019 were above their own expectations (ener|gate Gasmarkt 05/20). Although the group’s TSO Ontras still provides the biggest chunk of the earnings, the storage business – more about this later in this edition (see chapter 3.4.1) – and also the business unit Handel & Vertrieb (Sales & Trading) make substantial contributions to the overall earnings. The annual report of VNG Handel & Vertrieb was published in the Federal Bulletin on July 20. The earnings after taxes, based on the financial statement under German commercial law, which were transferred to the holding company VNG, rose from 3.4 to 20.7 million euros.

But not only the figures of the VNG Group are good. VNG is actively seeking inorganic growth options. The company is financially and structurally capable of handling acquisitions. In July, VNG was picked as the buyer of Gas-Union. The German Federal antitrust authority has already approved the merger. Some supervisory boards of Gas-Union shareholders still have to give their approval – but that is more a formality. The final closing is expected in September. You will find the report about the takeover in chapter 4.1.1 of this edition. ener|gate Gasmarkt talked about the development of the company and the success factors with the two managing directors Kerstin Schultheiß and Konstantin Herzog von Oldenburg.

The discussion on the regulation of hydrogen networks in Germany has reached the next level. BNetzA launched a consultation on the need and the potential design of such a regulation. On roughly 100 pages, the authority provides a comprehensive survey of the status quo of the commercial and regulatory environment for hydrogen, and outlines several options for the regulation and related issues that must be decided. With 12-page questionnaire (okay, the questions are on five pages), BNetzA wants to get feedback from stakeholders on the different aspects of the whole topic.

BNetzA favours a new separate act, a Hydrogen Infrastructure Act (WiG). Alternatively, a new chapter on hydrogen might be added to the German Energy Law (EnWG). In the paper, BNetzA argues that simply adding hydrogen to the gas definitions in the EnWG and the relevant ordinance provisions does not do justice to the complexity of the issue. Several associations, among them FNB Gas, the association of the TSOs, propose such a quick fix of the regulatory framework to integrate hydrogen into the gas network regulation. What are the reasons for the perceived complexity by BNetzA?