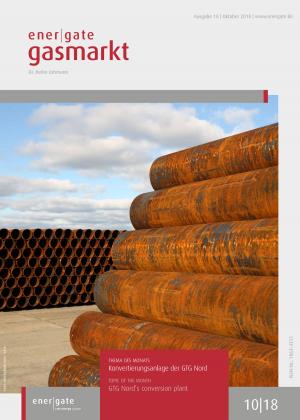 This edition has three main topics of the month: the GTG Nord conversion plant, biomethane and the German LNG terminals. To start from the back, I must say I was surprised about the dynamics around German LNG terminals. I made a bet that the Brunsbüttel terminal would never be built. To be quite honest, I think I will lose that bet. One crucial game changer is geopolitics. It is being said that the US is putting pressure on Europe to make an additional investment in LNG infrastructure and that Qatar is looking for new friends to counter its blockade by Saudi Arabia and its Arabian allies. Geopolitics seem to be re-establishing long-term bilateral relations in the gas industry that had been overcome through the market liberalisation.

The topic of the month: GTG Nord's conversion plantHow will things continue in the Netherlands?

This publication reported in the last edition that Mr Wiebes would propose to the second chamber of the parliament the reduction of production for the next gas year to 19.4 Bcm. Only a very small safety buffer for a cold year is provided for. For the current gas year, the safety buffer is 5.4 Bcm. In the letter to the parliament with the new proposal of August 24, Mr Wiebes openly addresses the issue of security of supply. In principle, Mr Wiebes writes, production should be at a level that guarantees security of supply. „Not more, but also not less“ should be produced. He also writes that in future security of supply might not be automatically given. Measures to reduce demand or to increase L-gas production from other sources (blending, conversion) might not be implemented fast enough. As an ultimate solution, interruptions of exports, regional networks or the supply of large industrial users might be unavoidable. However, Mr Wiebes admits that all three options might not be feasible. Even protected customers or – if large food producers are interrupted – the supply of food might be affected. In the Netherlands, there is currently a debate about whether the country is sufficiently prepared for a gas crisis situation. Whether Mr Wiebes will use his gloomy scenarios to urge the parliament to accept a higher safety net remains to be seen.

This publication has repeatedly reported that the biomethane sector is not really on an upward trend. Figure 5 shows nicely how the number of plants has stagnated since 2016. This year, the market perspective for biomethane in all three segments deteriorated. This is the clear perception of Jane Hochi, managing director of Biogasrat, an association of the biomethane industry. ener|gate Gasmarkt talked to her about the development.CHP sector (or EEG sector) By far the most important sales market for biomethane is the CHP sector. The combined production of power and heat fuelled by biomethane is subsidised. The Law on Renewable Energies (EEG) is the legal foundation. However, after the revision of the law in 2014 (EEG 2014), subsidies were strongly restricted, and new projects are now hardly possible (this is the reason for the stagnation shown in Figure 4). However, Ms Hochi says that over the past years, the gas prices have gone down and, as a consequence, operators of biomethane-fuelled CHP plants are switching to natural gas. This is leading to a lower biomethane demand, and the operators of biomethane plants have to cope with oversupply and decreasing prices. The latest surge of natural gas prices has not changed the situation. Part of the problem is the expiration of long-term supply contracts for biomethane to CHP plants. The operators of biomethane plants have a “huge” problem because they cannot sell the volumes or have to make price concessions. According to data from the Deutsche Energie-Agentur (dena) Branchenbarometer (sector barometer), a total of 7.5 TWh were sold in the CHP market in 2017. For three years, the volumes have been stagnating at this level. “Our members are looking for new markets outside the EEG, but in these potential new markets the conditions are even worse”, Mrs Hochi complains. There will be more about these markets later on.