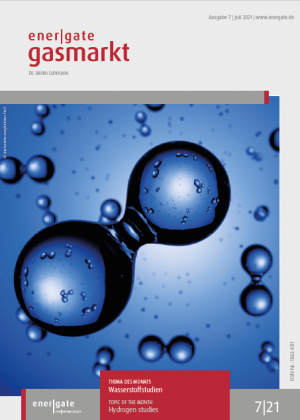 In this edition I will be “tormenting” you with three hydrogen studies in the Topic of the Month. Why? It just happened in the course of the month. But it gave me the opportunity to think more intensively about the topic once again. It is already a topic in many conversations as it is. I am always a bit astonished at how quickly conversations turn to hydrogen, even with traders or salespeople. I also moderated some discussions on the topic. What particularly gets me thinking is the potential role or non-role for hydrogen in the heating market and the quality of the debate. Many stakeholders strictly oppose the use of “scarce” hydrogen in the heating market, mainly because the conversion of electricity into hydrogen is inefficient if the electricity can be directly used for heating purposes. It is a plausible argument. But the conclusion that climate-neutral hydrogen for heating should not be subsidised, that all subsidies should be allocated to electric heat pumps and district heating, and that the installation of new gas boilers should be banned is unsatisfactory, in my opinion. Hydrogen is one option for decarbonisation, and it would be important to design a framework that allows us to discover which option is under which conditions the most efficient solution. Perhaps it will never be hydrogen. But I think it is wrong to assume this in a kind of central planning approach. Perhaps this central planning is needed to make the Energiewende happen. I am not yet convinced and will continue to think about and discuss it.

TOPIC OF THE MONTH Hydrogen studies

Studies on the different aspects of a future hydrogen market are published almost daily. In the following, the intention is to give an overview of this study landscape. But three studies shall be introduced in more detail because they show the aspects of the current German discussion and the different perspectives nicely:

The German Hydrogen Council commissioned three research institutes of the Fraunhofer Group (System and Innovation Research (ISI), Solar Energy Systems (ISE), Energy Infrastructure and Geothermal Energy (IEG)) with a "Meta Study Hydrogen", to assess the future demand for hydrogen in Europe and Germany. The study was published at the beginning of June. The study is worthy of attention because the German Hydrogen Counsel is the official consultancy body for hydrogen of the German government and makes important recommendations for the implementation of the national hydrogen strategy.

The Öko-Institut, a research institute and thinktank focussing on ecological issues, did a study "Hydrogen Strategy 2.0" for Stiftung Klimaneutralität (Climate Neutrality Foundation), also a thinktank. At the end of May, the study was published and introduced at a press conference. Rainer Baake is the director of the foundation. Until the end of the last electoral term, he was secretary of state in the German Ministry of Economic Affairs and Energy (BMWi). Allegedly, Mr Baake is one of the fathers of the German Act on Renewable Energies (EEG). As the secretary of state, he pushed forward the German energy transition - often against resistance from the traditional energy industry. In Berlin, political observers wonder whether he will play a role in the next German government after the elections in September if the Green Party plays a major role in that government. Felix Matthes, who coordinates research of the Öko-Institut was a member of the team that worked on the study. He presented the results together with Mr Baake. Mr Matthes is one of the leading energy economists in Germany and a member of the National Hydrogen Council. This should be enough arguments to justify a closer consideration of the study.

The amendment of the German Energy Act with the new regulation of hydrogen networks was hard work. In the very last week of the current parliament, it was adopted on June 24. In the last edition, it was reported that the reason for the delay was not mainly the regulation of hydrogen networks but other topics that are included in the amendment of the Energy Act and other energy laws. But it was still debated during the last weeks whether the separate regulation of hydrogen and gas networks is indeed the appropriate approach. Associations and representatives of the gas industry and the municipally owned companies are said to have lobbied intensively for a joint regulation.