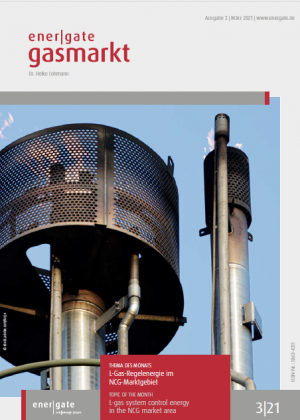 did you miss the E-world in February? In discussions I had with different people in February, I had the impression that tristesse was the prevailing sentiment when it came to the postponed event. Only the weather failed to realise that E-world wasn't taking place. There was the same weather chaos which is, strangely enough, typical for when E-world is on. During the E-world week there was lots of snow and arctic temperatures in North Rhine-Westphalia. Nevertheless, farsighted traders who went especially "long" for the E-world week were disappointed. The Day-Ahead price peaked at 21.00 euros/MWh on Monday, the day before E-World was supposed to kick-off, and started its descent on the first day of E-world. At the end of February, the 2021 E-world was finally cancelled. An online community is to make up for the cancellation of the trade fair. But the good news is that extreme weather conditions doesn’t affect the Internet, usually.

This brings me to my main point of this editorial: Gas trading and gas prices have been very strange in Q1 of 2021. In the last edition's editorial, I wrote that the spiking prices in southeast Asia had been compared with the development of bitcoin prices (However, I was not entirely correct. The comparison was related to LNG charter rates, but both prices and charter rates soared). In February, the same happened in the US during an extreme cold snap in parts of the country. Locally, more than 1,000 $/MMBtu were paid (2,600 euros/MWh), a much more dramatic spike than in southeast Asia. But what really concerns me in this edition is the development of the system control energy market in the NCG market area. Up to 390 euros/ MWh were paid for local system control L-gas energy. The commercial conversion reached the level of the crisis year 2016. But no one except me seems to be aware of this development. All efforts to find someone who could give me decent explanations have failed. Therefore, dear readers, you have to rely on my own descriptions and attempts of analysis.

In January, the trading prices for gas reached an all-time high in southeast Asia (ener|gate Gasmarkt 02/21). This caused a lot of excitement and discussions among traders. Even the International Energy Agency (IEA) released a comment arguing that the odd price development demonstrates the need for market reforms in that region.

But much higher prices were paid in the local markets for L-gas system control energy in the NCG market area in January and February. The peak hourly price was reached on January 27 for 103 MW to be delivered from 6:00 to 7:00 a.m. in the L-Gas zone West. The price was 390 euros/ MWh. It cost NCG 40,170 euros (at the end of the day, the balancing group managers pay the bill because the amount is added to the neutrality balancing charge account).

However, extreme prices are not unprecedented in the local market for system control energy. ener|gate Gasmarkt has repeatedly reported about such price spikes (most recently in ener|gate Gasmarkt 02/21). But since the launch of GABi Gas 2.0 in October 2015 and of the local system control energy trading at EEX in April 2016, these amounts of extreme price spikes have rarely occurred.

On February 10, the German government passed in its cabinet meeting the draft of the act for the regulation of hydrogen networks. Legally, it is an amendment of the German Energy Act (EnWG) (ener|gate Gasmarkt 02/21). Although in particular associations of gas network operators as well as the Federation of the German Industry (BDI) raised fundamental concerns regarding the approach of the German Ministry of Economics and Energy (BMWi), only minor changes on the first draft of the ministry were made for the cabinet version. Most of these changes had already been included in a working version circulating in Berlin at the beginning of February. One last minute change was made afterwards and added to the final draft. Table 1 gives a synoptic overview of all changes. Presumably, the most important change was the abandonment of a horizontal and vertical legal unbundling of the operations of hydrogen networks from all other energy activities of a company. This legal unbundling was not part of the ministry’s guidelines of December that were the basis for the legal proposal (ener|gate Gasmarkt did not perceive this deviation in the proposal from the guidelines properly and hence did not report it in the last edition).