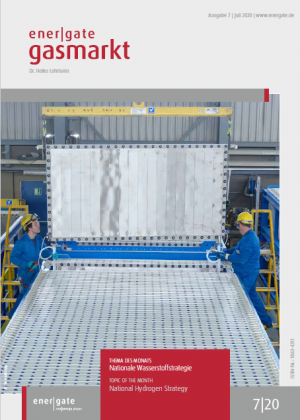 Already for the second time this year, the National Hydrogen Strategy is the topic of the month. In the March edition, the first draft was introduced, which had been published by the Ministry of Economics and Energy at the end of January. Now, in this edition, the final product is appreciated. In between, dear readers, I had to put you off several times because the approval of the strategy was postponed. If one now compares the first draft and the final version, one wonders why the inter-ministerial consultation took so long to clarify the disputed topics. The compromises finally put to paper in the strategy seemed rather obvious.

The career of clean, carbon-free or carbon-neutral hydrogen is incredible. Events on hydrogen are more than well attended. At my partner energate, an energy information provider, hydrogen-related stories in the portal usually have high “click numbers”. Whether hydrogen will finally fulfil the high expectations remains to be seen. The core problem: clean hydrogen from whatever source is simply much more expensive than natural gas or “grey” hydrogen. The conversion of the production procedure in the steel industry to hydrogen using direct reduction will also be expensive. And the industry is currently not on the bright side of life. I am personally convinced that a market launch will be only successful if not only CAPEX is supported. It is necessary to bridge the price difference with subsidies or a compulsory utilisation. Some kind of feed-in act will be needed, and there are some ideas stipulated in the strategy. My analysis of the strategy is long. The bizarre stories around the staffing of the Hydrogen Council are told in the market rumour section.

„The cabinet’s decision on the NSW is scheduled for December 3 or 10. After the decision, a conference open to the press will be held in Berlin. Federal Minister Altmaier, Federal Minister Karliczek and Federal Minister Scheuer will attend the conference“. This plan was stated in a note from the Federal Ministry of Economics and Energy dated August 6, 2019, describing the consulting services to be provided by the German Energy Agency (Dena), an energy think-tank, to implement this schedule. For the sake of completeness: “NWS” means National Hydrogen Strategy .

December 3 and December 10 passed, and not even a draft of the strategy was released. Even the preliminary discussions among the „black“ ministries (in German party politics, „black“ is used to refer to the Christian Democratic Party, CDU, or the Christian Social Party, CSU) was much harder and controversial than expected. Finally, at the end of January, the first draft of a hydrogen strategy was published (ener|gate Gasmarkt 03/20). Afterwards, the formal process of interministerial consultation started. This process was much more time-consuming than expected. One cabinet appointment after the other was postponed. It was bizarre. The involved ministries had dissenting views mainly on four topics.

Unlike the bottom-up approach of enervis, Team Consult chose a more top-down approach. The assessments and forecasts for the Corona Energy Market Radar that has been published since March 2020 are based on the economic forecasts of several economic research institutes, the business climate index of ifo, also an economic research institute and production indices. Team Consult makes an assessment for the whole year, applying an optimistic and a pessimistic scenario. At the beginning of May, the consultants were, in general, more bearish – even in their optimistic scenario. For 2020  they estimated a decrease in consumption of 60 to 100 TWh, but without any temperature adjustment. In the June edition of the Radar, they reduced the estimate to 25 to 40 TWh. Besides the temperature adjustment, higher gas consumption for power production is
the driver of the optimistic forecast. What is interesting is the assessment of a Covid-19-related reduction in consumption in different industry sectors based on the ifo index.