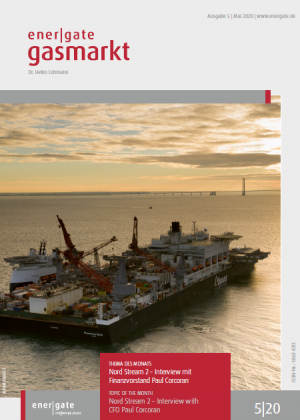 It is the second month the corona crisis governs our lives. But in this edition of my Gasmarkt, it only plays a minor role. I already wrote in the last edition that the crisis has, remarkably, had a relatively weak commercial impact on the gas market and its players. This observation is still true. To be honest, I was astonished by the allocation data published by the two market area operators. The withdrawal volumes in the sector of hourly metered customers (RLM) and non-hourly metered customers (SLP) have, so far, not declined dramatically. However, as I mention in the market rumour chapter of this edition, one has to be careful with the data, which is based on the standard load profiles for non-hourly metered customers. They are most likely not adjusted to the changed market conditions. But in other countries, demand does not seem to be dramatically reduced as a consequence of the crisis either. That is at least what Matthew Monteverde from Argus showed in a webinar of the enmacc platform.

Nevertheless, I am slightly cautious when talking about “business as usual”, as the economic damage from the crisis is not yet foreseeable. But in this edition, an everyday gas perspective prevails. Two important elements of this everyday gas life are the rulings KAP+ and KOMBI that will allow a reasonably good start for the future THE market area. In my opinion, the two rulings show that stakeholders and BNetzA are able to find viable compromises. Ultimately, it was a good process. When this process started, such an outcome looked unlikely. I summarise the process in this edition.

In May, BNetzA must decide whether to grant a derogation from regulated third-party access for Nord Stream2. Paul Corcoran, the project company’s CFO explains in this edition why Nord Stream 2 thinks such a derogation is justified. Currently, the work on the pipeline is interrupted. Akademik Cherskiy, a Russian pipelaying vessel that should be capable of doing the remaining deep-water pipe laying is now in the North Sea, to the west of Holland. But Mr Corcoran assures in the interview that Nord Stream 2 has not decided on a plan for how to finish Nord Stream 2, but that options are being evaluated

The end of 2019 had been a rough time for the Nord Stream 2 project company (ener|gate Gasmarkt 12/19). The US President Donald Trump signed the sanction bill “Protecting Europe’s Energy Security Act (PEEESA)” that threatens all persons and companies with sanctions that may provide pipe-laying vessels for work at a depth of more than 100 foot (30 metres) to the Nord Stream 2 project company (and to Turk Stream). As a consequence, Allseas, the company engaged for the pipe-laying work, withdrew the two vessels immediately and stopped work on Nord Stream 2. Also, in December an amendment of the German Energy Law came into force that transposed a change of the EU Gas Directive into German national law. Under the amended European and national legal framework, all pipelines connecting third countries with EU member states are under the jurisdiction of EU regulated network access within the territorial waters of the Member States. For pipelines completed before May 23, 2019 a derogation with a maximum duration of 20 years is possible.

Time passed, and Nord Stream 2 actively tried to overcome the new obstacles for finishing work on the pipeline. The company has a strong track record in overcoming obstacles skilfully over the whole project timeline. Akademik Cherskiy, a Russian vessel that is able to lay pipes in deep waters is on its way from the Far East to Europe. At the end of April, the ship was sighted in the North Sea off Denmark. Furthermore, Nord Stream 2 applied to BNetzA for a derogation from the rules of Third Energy Package regulation arguing that commercially the pipeline was completed before May 23, 2019. ener|gate Gasmarkt talked to Paul Corcoran, Nord Stream 2’s CFO, about the sanctions, the finishing of pipelaying work, and why Nord Stream 2 thinks a derogation from regulation is justified for Nord Stream 2. BNetzA has to decide on the application by May 24.

After the charges soared, several associations and cooperations of utilities demanded adjustments of the rules for the balancing system, GABi Gas 2.0 to reduce the volatility of the level of the charges or to make at least adjustments more predictable. But these initiatives lead to nothing. Neither BNetzA nor the market area operators saw any need for action. In October 2019, the charges were once again reduced substantially. The whole development is like a rollercoaster.