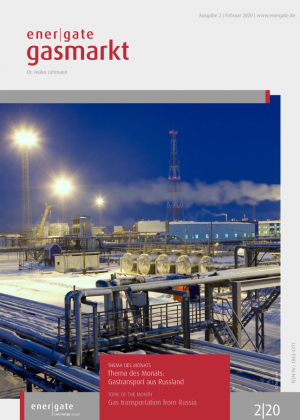 What I found most remarkable in January were the discussions about the impact of the future CO2 prices on the non-ETS sectors heating and transportation. You will be aware of the fact that shortly before Christmas the Mediation Committee of the German Bundestag and Bundesrat agreed to lift the starting price to 25 euros/t. To be honest, I did not really think about the impact. I suppose I was too occupied with other topics such as Ukraine transit or Nord Stream 2. However, at the beginning of January, first discussion partners asked me whether I had an idea what 25 euros/t mean for the gas price. I did not, but quickly learned that it means around 4.50 euros/MWh - and this is only the starting price. Presumably, the CO2 price will have consequences and change behaviour. 4.50 euros/MWh are above the pain threshold. Consultants I know quite well did not want to give me concrete data on consequences for the choice of heating systems. This is understandable, as such analysis can be monetarised, especially when the impact of the new aid schemes for heating systems are considered, too. The consultants will earn money and I have written about the basics of the new framework.

There is a topic that might seem a bit odd, but which is important to me, as it may have a bigger impact. On January 1 in Austria, a voluntary labelling of the origin of gas was introduced. I think this is highly interesting as guarantees of origin and certificates will be decisive for developing a market for green/blue gas/hydrogen. The Austrians have now offered the first solution; I think that work on European harmonisation is necessary and has already started.

In January, most senior managers of the industry attended the Handelsblatt Energy Summit. No groundbreaking new insights were discussed. Most participants raised their eyebrows about the bloodless speech of the minister of economics Peter Altmaier - more on that in this edition. Finally, a word on my own behalf: In February, E-World is taking place and I am taking a week off to go skiing. The next edition will therefore be published a few days later. This also happened with the last addition due to technical problems. I can only apologise for any inconveniences.

Topic of the month: Gas transportation from Russia

Shortly before Christmas, the showdown took place regarding US sanctions against Nord Stream 2 (to use the abbreviated version) as well as the negotiations for future Ukraine transit. Almost at the same time, a general agreement for the future transit was achieved and the US sanctions against Nord Stream 2 decided. This was already known and mentioned when the January edition went to print. In January, more details became known and a first impact assessment is feasible. In the following, a description of the details and the impact is provided.

The Protecting Europe’s Energy Security Act (PEESA) very specifically stipulates sanctions against all persons that in any way provide (sell, lease, rent, let) vessels able to lay pipes in a water depth of more than 1000 inches (30 metres). And although the act allows a 30-day period to finish work, Allseas, the company that owns the two pipe-laying vessels for Nord Stream 2, withdrew the ships immediately after the act was signed by the US President. Only a few days later the company announced the complete abandonment of the project. The reason Allseas acted so promptly immediately becomes clear when one reads the letter the two Senators Ted Cruz and Ron Johnson wrote on December 18 to Edward Heerema, the Allseas CEO (Ted Cruz published the letter on his web page)...

The National Strategy Hydrogen of the ministry of economics and energy (BMWi) is ready. Well, at least a draft is ready, as several sources confirm, who were able to browse through the 25 pages presented to them for some minutes by senior bureaucrats (more was not available). One important proposal is the establishment of a National Hydrogen Council. Whether the paper contains more concrete actions is not known. Openness to technology is emphasised, which means that not only green hydrogen, but also blue hydrogen is an option. At the end of January, the draft was still at the chancellery for agreement. What will come next? The minister of economics, Peter Altmaier, dealt in a very odd manner with that question during the Handelsblatt Energy Summit, an industry event on January 21. In his speech, he did not even mention the hydrogen strategy. Klaus Stratmann, a Handelsblatt journalist who moderated the conference asked him afterwards when the strategy would be approved. Mr Altmaier initially said a few days, corrected himself, and then talked of a few weeks before the agreement with the different ministries would commence. He added that the strategy would then be approved by the cabinet. At the side-lines of the conference, first participants wondered whether the strategy would ever reach the cabinet. The ministry of environment (BMU) in particular has an entirely different view to that of the BMWi regarding the future role of hydrogen and the distribution of responsibilities in the government. Allegedly, BMU is working together with a consultant on its own hydrogen strategy.

However, even the first agreements with the ministries of transportation, research and economic cooperation took longer than expected. These ministries with ministers appointed by the CDU or CSU were involved in the making of the strategy. Several sources say that in particular the ministry of research wanted a lot of changes and was not really supportive of blue hydrogen...