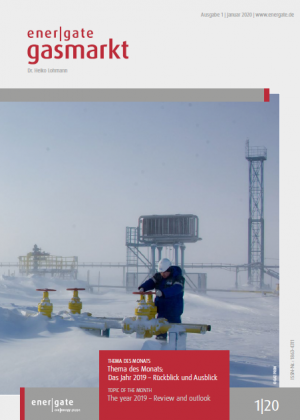 I hope, dear readers, that you have had a relaxed time and can start the new year with a lot of ideas. It was a strange time when I finished the manuscripts for the edition you are now holding in your hands. Some important things happened that may influence future Russian gas flows. I finished the manuscript on December 22; on December 19 there had been a general agreement between Russia and Ukraine about a new transit contract. This is the short version, because ultimately companies will sign the contract. If this has indeed happened by January 1 and gas flows, you will know. At the time I finished this edition, I did not know. Also, on December 21, the US President Donald Trump signed PEESA, the act that will impose sanctions against companies that provide pipelaying vessels for Nord Steam 2 and Turk Stream. At the beginning of January, you will perhaps know more about what the real consequences are.

As is the case with every first edition of the year, this edition contains a review of 2019 and an outlook to 2020. One major topic for 2020 should be - and this is becoming ever clearer to me - the issue of the proper regulatory framework for hydrogen networks. BNetzA, too, thinks that this is necessary. This is made very clear in the confirmation document for the Scenario Framework for the Network Development Plan 2020 – 2030, which I have summarised in this edition. Sometime in autumn, I heard that Gas-Union was increasing...

Topic of the month: The year 2019 - Review and outlook

In this edition, it is the "same procedure as every year": There is a review of 2019 as well as an outlook to 2020 and events that are already foreseeable.

Gas is on the political agenda

From the perspective of the gas industry, the dialogue process Gas 2030 was the main highlight of 2019. The ministry of economics and energy (BMWi) launched the process in February. After years of being neglected by politics and the federal administration, BMWi had intense discussions with the gas industry. Initially, it was not expected that the whole process would evolve into a hydrogen dialogue. Some industry representatives already complain that there is too much talk about hydrogen and no longer enough about (natural) gas. To what extent and when natural gas will be replaced or supplemented by blue or green hydrogen is unclear. But for the gas industry, hydrogen and synthetic methane as carbon-free or neutral energy carriers enable new business models. More and more companies are working intensively on these models that may also make new applications possible, mainly in the industry...

In July, the ministry of economics and energy (BMWi) announced the 20 projects that were picked in the "Sandboxes of the Energy Transition" contest for ideas. Eleven projects deal with sector coupling and hydrogen technologies. After the first round was finished for the chosen consortia consortia, the real work stated. They had to submit the applications for grants, and many consortia became somewhat disillusioned. It is not clear whether the grant per project will be sufficient. Also, contrary to the expectations of some participants, there will be no exemption from the regulatory framework. That means for the power for electrolysers that all levies and charges must be paid if the windmill or solar panels are not directly integrated spatially into the project. To compensate this burden a new subsidy for the OPEX is planned. But BMWi is still working on a solution that complies with the EU rules for subsidies. Furthermore, the restriction of the period for the grants to five years seems to be a hurdle for some projects. Also, general issues of compliance with EU subsidy rules are not yet settled in every case. According to one source, there are very intense and cooperative discussions with the BMWi about these topics. Nevertheless, it seems to be far from certain that all hydrogen projects will remain in the sandbox...