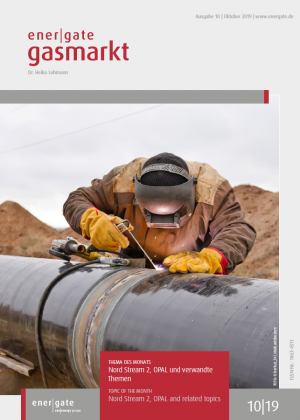 On September 10, the bearish mood in the gas market suddenly vanished. It was the day that the Dutch minister of economics, Eric Wiebes, explained to the Dutch parliament how he will cap the Groningen production from October and when the production is to be phased out. On the same day, the European Court decided that the EU Commission had not properly analysed the impact on security of supply in individual member states when it approved the “OPAL compromise”. The approval was nullified. Only half of the OPAL capacity is allowed to be used. The gas prices reacted immediately, from the perspective of some traders excessively. At least the prompt prices returned to their bearish pattern. There are more details on both incidents in this edition. The consequences of the OPAL decision are complex. Therefore, in the days after the court decision, OPAL Gastransport had a lot of requests for an explanation.

The OPAL decision is embedded in the topic of the month, where the broader picture of the future flows of Russian gas to Europe is shown. Everything is interconnected and therefore the current status of the Nord Stream 2 project, Ukraine transit, OPAL as well as Polish transit is described. In the last edition, I already reported in the market rumour section that there is a risk of interruption of the Ukraine transit in January.

Topic of the month: Nord Stream 2, OPAL and related topics

In the last edition, ener|gate Gasmarkt mentioned in the Rumours chapter a potential new “Ukraine transit crisis” from January 2020. The scenario: Nord Stream 2 will not be operational and there will be no valid transit contract in place between Gazprom export and any existing Ukrainian TSO entity. ener|gate Gasmarkt thinks the risk of at least a short major transit curtailment is high. However, most analysts do not share this view, as ener|gate Gasmarkt learned from discussions in September. But the Q4/19- Q1/20 spread is increasing and reached 3.00 euros/ MWh at the end of September. On September 19, a new round of trilateral negotiations for a new contract between representatives from Ukraine, Russia and the EU Commission took place. No final agreement was reached. The negotiations were described as “constructive”. Allegedly, Gazprom is willing to book capacity at a new Ukrainian TSO according to the rules of the internal gas market. Maroš Šefčovič, the still responsible vice president of the EU Commission, said after the meeting that Ukraine was making progress in implementing these rules and establishing an unbundled independent TSO. Negotiations will continue until the end of October on the political trilateral level.

It should also be mentioned that the ministry of economics (BMWi) “officially” still believes that Nord Stream 2 will be ready in time. “The German government assumes that the Danish approval process will be finished soon and that the pipeline will be finished in time”, wrote the BMWi’s state secretary Andreas Feicht in his answer to a parliamentary question from Christian Kühn, member of the parliamentary group of the Green Party. But the ministry seems to talking with a split tongue about that topic. When the moderator of at the Deutsche Energiekongress, an industry conference, Michael Bauchmüller (Süddeutsche Zeitung, a daily newspaper), asked the parliamentary state secretary Michael Bareiß about the completion of Nord Stream 2, he made very clear that he does not expect it to happen in 2019.

With its decision on September 10, The European Court caused real excitement in the European gas market. It declared the EU Commission’s approval for the compromise between BNetzA, OPAL Gastransport, Gazpom and Gazprom Export on the full utilisation of OPAL null and void. A short overview of history of the compromise is laid down in Box 1. The Polish government argued that the gas supply of Poland was endangered. The higher flows through Nord Stream 1 may reduce flows on other Russian export routes (Yamal Nord, Ukraine). This may reduce the pressure on these routes in a way that sufficient flows to the Polish market might not be guaranteed.

In the last edition, ener|gate Gasmarkt reported that the draft of the summary paper for the dialogue process Gas 2030 was scheduled to be published on August 28. The ministry of economics and energy (BMWi) did not meet that deadline. On September 11, the 33 pages titled “Dialogue Process Gas 2030 – First Summary” were published. The co-ordination within the ministry took longer than planned, some sources commented. Slightly embarrassing for the ministry is the fact that it had to delay the meeting with roughly 25 executive board members and managing directors from the gas industry. They had initially been invited for September 5 to have a preview of the main results. The meeting was rescheduled to September 12. Enough gossip about the finishing phase and back to the paper. As a starter: In principle, representatives of the gas industry expressed satisfaction with the outcome in first informal assessments: “The paper stipulates a long-term role for gaseous energy carriers and the infrastructure”, as one discussion partner pointed out as the decisive point to ener|gate Gasmarkt.

Another crucial issue: The paper clearly denies any premature phasing out for natural gas. “Such a step would not only create enormous risks for Germany as an industrial location but for the energy supply in general” – this wording is already in the introductory remarks of the paper. Until 2030, a slight increase of gas demand is expected...