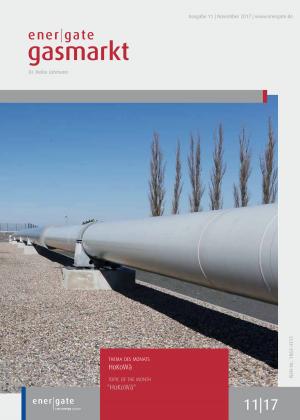 The most exciting day in October, from a gas perspective, was the 11th. That is the day on which the Higher Court of Düsseldorf (OLG) held the hearings on the complaints against HoKoWä and the OPAL compromise contract. The HoKoWä hearing was a bit like an alumni meeting. Many TSOs were there, the courtroom was crowded. It was finally a remarkable moment when the BNetzA suspended the ruling in the courtroom. How that happened and what it means for the industry will be explained in this edition. I know, HoKoWä is not a very entertaining topic and it is interesting mainly for the TSOs. But it is about tariffs and tariff structures, which makes it a topic that ultimately has an impact on the whole market. It may even become more complex if one looks at the implementation of the Network Code Tariff Harmonisation (NC TAR). That will be reported about in the topic of the month, as there is a direct link to the suspended HoKoWä ruling. The complexity of network regulation is the price for market liberalisation. So far, the price looks acceptable.

The conflict between BNetzA and EWE Netz about two different price sheets (ener|gate Gasmarkt 09/16 and 03/17) is in principle solved. EWE Netz separated a new network entity, EWE Netz RVN from the network operator EWE Netz. “RVN” stands for “Regional Distribution Network”. The nw company will operate this regional network from October 2018. It is a high pressure network with connections to 24 large industrial gas users and five local distribution networks. Most of the industrial users have an annual gas consumption of more than 100 GWh, the largest has a consumption of more than one TWh. EWE Netz had applied for a separate pricing scheme for those customers. The responsible BNetzA Ruling Chamber (BK) 9 prohibited this separate pricing sheet. An application of the general EWE Netz pricing scheme would have led to massive tariff increases of up to 400 per cent for these customers.

Topic of the Month: "HoKoWä"What happened up to September 2017

In brief: What happened up to the end of September 2017? On June 22, 2016, BNetzA Ruling Chamber (BK) 9 decided on the “requirements for a proper (horizontal) cost compensation as well as for the proper split of cost on the entry and exit tariffs”. That is the official title of the ruling. The most important regulation was the “half pot” with uniform entry tariffs for injection and a cost compensation among the TSOs so that cost and revenues fit with the revenue ceiling. Fluxys, Gastransport (GTG) Nord, Jordgas and Gazprom Export filed a court complaint against the ruling at the Higher (OLG) Düsseldorf Court. Jordgas withdrew the complaints some months after Gasunie Deutschland and OGE took over the company. OLG works thoroughly but slowly and the court hearing was not scheduled until October 11, 2017. Earlier, the TSOs calculated their uniform entry tariff. The result of the first calculation for the OGE market area was 3.50 euros/kWh/h/a and 2.77 euros/kWh/h/a for the Gaspool market area. After re-calculation the fees were adjusted to 3.595 euros/kWh/h/a and 2.809 euros/kWh/ h/a respectively. A number of TSOs already published their preliminary tariff list based on these entry tariffs because the distribution network operators connected to these TSO networks need it for their internal order process. In the Thyssengas network it created a good mood because exit tariffs would have gone down by 32 per cent.