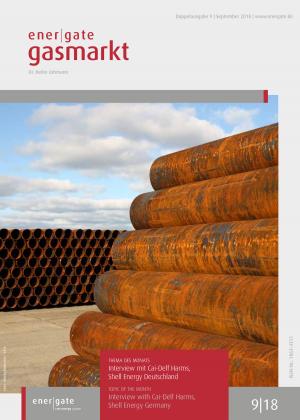 Quite frankly, there were so many interesting topics this summer that it would fill more than two editions. I had to eliminate a number of stories I had already written for this double edition. It contains a number of interviews, mainly related to new topics. Among other things, I talked to Roger Miesen, the CEO of RWE Generation about the perspectives for gas-fired power plants in Germany. Also, I talked to Tor Martin Anfinnsen, Equinor’s head of trading and sales, about Equinor’s acquisition of Danske Commodities. Topic of the month is also an interview with the managing director of Shell Energy Deutschland, Cai-Delf Harms. In August, Shell adjusted its European organisation and sales strategy. The business with end customers is being strengthened and broadened. What I found remarkable was how seriously Shell takes the energy transition. Loyal readers can look it up in their Gasmarkt archive: In August 2012, I interviewed the Shell Energy Deutschland managing director at that time, Bettina Pohl-Lütcke, about the sales strategies. Since then, some changes have occurred.

ExxonMobil later withdrew step by step from the sales business and focused on wholesale trading. Shell developed into a very active sales company. For some time, the company was one of the best suppliers for medium-sized industrial gas users and for L-gas users. But over time Shell Energy as part of the Shell Group also developed new market segments like small-scale LNG and hydrogen, although it is not directly part of the sales business. But Shell managers from the sales company helped to put these topics on the agenda in Germany. The sales strategy itself was adjusted several times over the years to adapt to changing market conditions. The latest adjustment was made in August this year. Cai-Delf Harms has been the managing director of the sales company since the beginning of 2018 (ener|gate Gasmarkt 03/18). ener|gate Gasmarkt talked to him about the sales business and its new alignment, and a bit about smallscale LNG and hydrogen.

ener|gate Gasmarkt: Mr Harms, in 2016 Shell Energy sold around 59 TWh of natural gas and profit after tax was 15.7 million euros. What are the figures for 2017?

Harms: The figures will be published soon. They are almost the same as for 2016 and deviate by only a few per cent.

Redundancies at Wingas or the Gazprom group are still a topic for discussion. Allegedly, the storage operator astora, which since the beginning of this year is directly controlled by Gazprom Germania, has also cut jobs. Details are not known. One source said roughly 30 jobs would be axed. Rumours about a shift of the company’s location from Kassel to Berlin do not seem to be substantiated. Astora is moving, but only within Kassel to Königstor. Königstor is the Wingas location, and astora will move into the Wingas building. This was also reported by the local newspaper Hessische/Niedersächsische Allgemeine.