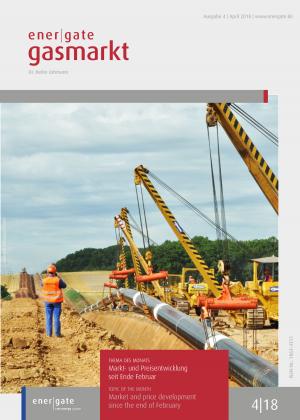 Market and price development since the end of February

It was a crazy week between February 26 and March 2. The trading prices skyrocketed to unprecedented levels, the surpluses in the accounts of the market area operators melted away and some storage operators experienced that the last molecules of working gas were gone. In the topic of the month, I have tried to describe the development, identify the causes and to point out potential consequences. As always during my research, most people I talked to preferred not to be mentioned by name in this publication. Or in many cases, new insights are a side effect of informal unplanned talks.

At last, Germany has a new government. The members of the Social Democratic Party (SPD) agreed with a surprisingly high majority (two thirds) to the coalition treaty. The new German government started to work mid-March. And regarding energy and climate politics it started with a strong move. The secretary of state, Rainer Baake, moved ahead of his alleged sacking and announced that would be leaving the ministry. In a two-page letter on March 5 to the designated minister of economics and energy at the time, Peter Altmeier, he wrote that “strong disappointment about the chapters on climate and energy policy” was the reason for his resignation (most likely Mr Baake himself distributed the letter widely). The transition to energy efficiency and renewable energies was being undertaken only hesitantly, it was added.

In the last edition, this publication mentioned some climate and energy topics from the treaty. Mr Baake’s disappointment is plausible. As a side note: One topic that was forgotten is the continuation of the subsidy scheme for the replacement of old boilers by new and efficient ones. Good for the gas industry: Subsidies are granted if efficient condensing boilers are installed. The previous ministry wanted to terminate the support if the new boilers are fuelled with conventional fossil fuels (ener|gate Gasmarkt 06/17). This continued support of conventional heating systems is most likely only a minor point for Mr Baake, but it is one topic by which the attitude of the new government towards energy and climate policy becomes visible (for major personnel decisions of the new government in the area of energy and climate policy, see chapter 4 on personnel).

In March, the EU Commission’s Directorate General Energy (DG Ener) published the final report of the Quo vadis study. ener|gate Gasmarkt reported in the edition 01/18 about the preliminary report and the workshop in which the preliminary report was discussed. The final version now contains not only the analysis of the current shortcomings of the internal market for gas and the four reform scenarios. It now also discusses the welfare effects of these scenarios and makes recommendation for the implementation of these measures. Peter Kaderjak, the director of the Hungarian think-tank REKK, one of the two authors of the study, had presented these effects during the workshop and ener|gate Gasmarkt included it in the report.